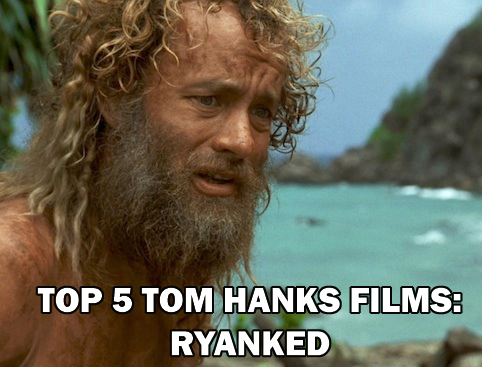 Ryanked has a silent Y, but it’s a Y nonetheless. Just take that in and then move on. It will be for the best.

RYANKED is a column in which I’m going to rank things. I’ve always enjoyed the art of ranking. And brackets. Holy heck do I love brackets. March Madness isn’t even that interesting, but it has brackets, so I’m so crazily on board. I use brackets for everything. Choosing places to eat, places to visit, things to throw, people to hate; everything!

And for my first Ryanked experience I’ve chosen a topic close to my heart: Tom Hank’s movies. The Hanks is a once in a generation talent who has made so many good movies it’s hard to pick your favorite let alone put them in order. I have to say for the record now; this is not a list of Tom Hank’s best movies. It’s a ranking of my favorite Hanks flicks. Ones that are close to my heart for one stupid reason or another. I’m not here to speak for you or your thoughts and opinions. I don’t know what those are because I am, to my dismay, not you. PS: I include animated movies because, well, because of a little story about toys coming to life. But I’ll get to that later.

If you’d like a masterclass on how to begin a movie, Saving Private Ryan is a great example. The stakes are high right off the bat. And no, I’m not talking about the awe inspiring Normandy D-Day invasion scene. If you remember, that is what happens second. What happens first is an old man falls to his knees in front of a grave at the Normandy American Cemetery and Memorial in Normandy, France. He is overwhelmed with emotion and he is crazy old. I don’t know about you but I sure as heck wanted to know more.

Tom Hanks is Captain John H. Miller, company commander, 2nd Ranger Battalion, U.S. Army. His job is to go find Private Ryan, who is the last surviving brother of four serviceman and also Matt Damon. By the way, Matt Damon got this role because Robin Williams took him and Ben Affleck over to meet Steven Spielberg while they were shooting Good Will Hunting and Mr. Spielberg was shooting Amistad. Upon meeting Matt Damon, Spielberg was taken aback as he recognized Damon from his brilliant performance in a Denzel flick called Courage Under Fire. Except, in that movie Damon was skinny as the dickens. When Spielberg realized that was only for the movie and Damon was in fact a normal sized human being, he was basically Private Ryan on that spot.

But anyway, if you want to know why Saving Private Ryan is on this list it’s because of this scene right here:

Steven Spielberg and Tom Hanks come together to make a movie. It’s a good one. That’s a story you can tell a few times. In fact, not putting Bridge of Spies (a 2016 Oscar nominee for best picture that shouldn’t win but is pretty good nonetheless) was tough as it was another Spielberg/Hanks joint. But Catch Me if you Can is special. It’s two titans of the industry: Leo v. Hanks.

One of the greatest con men of all time played by Mr. DiCaprio and his arch nemesis, FBI agent Carl Hanratty played to perfection by Hanks. The back and forth, the long monologues, and the chase to end all chases. Hanks is as versatile as any actor that has ever been on screen. If you’d like to prove that watch Big and Philadelphia back to back. But when he dons a pair of glasses and a watchful eye on the law, he really shines. He’s the authority figure with a heart that you can root against and for simultaneously. Also, for both effect and heart string fodder, Carl Hanratty misses his daughter and still wears his wedding ring. What’s not to root for?

In 2010 I watched Apollo 13 every night for four months. It was what I used to fall asleep. Thankfully I’d usually be asleep before Houston found out about a certain problem; otherwise I would never fall asleep. The moment where I was usually drifting off into space was the same one Hanks playing astronaut Jim Lovell, along with his wife, look up at the moon as he points out the mountain he named after her: Mount Marilyn.

Directed by Richie “narrator of Arrested Development” Cunningham, Apollo 13 brings you into space with Hanks along with the guy who yells as Helen Hunt in Twister, and the center of a large bacon themed actors connection game. Hanks again plays the guy in charge, always level headed and focused on the task at hand. Even in the toughest of times you feel as though a Hank’s character will pull you through safely. But can he do so even when his vehicle explodes in space? I don’t know, but I will probably have to watch it another 4 months in a row to reacquaint myself with that particular answer. Here’s a clip of Hanks explaining a tragedy to Aaron from Full House.

Toy Story launched Pixar into the stratosphere, much like Buzz Lightyear could also definitely do. Hank’s performance as the local sheriff slash Andy’s cowboy slash guy in charge jumps off the screen and into children’s hearts. Toy Story showed eight year old me that a whole other world of movies could exist and be executed to perfection.

Fun fact: because Tom Hanks is super busy being Tom Hanks, all of the Woody voiceovers minus the actual movies, are done by Tom Hank’s brother, Jim. There’s a Jim Hanks and his main job is to sound like his brother. That’s such a bummer for him. Someone should ask Jim if he’s sad and while wiping tears away with money he will reply, “Of course I am.”

Toy Story is the greatest animated movie of all time and in my opinion should have been nominated for Best Picture in 1996. It would have gone up against Apollo 13 and Braveheart, but you tell me how many moments in cinematic history make you feel happier than Buzz and Woody falling with style? Also, Apollo 13 and Toy Story in the same year, Tom Hanks? That’s not even fair.

I’d still give it to Braveheart by the way. That movie is so dope.

This Christmas my family sat down and watched one of my favorite movies of all time: Forrest Gump. When you talk about movies that narrowly miss impossible perfection, Forrest Gump is on that list.

I won’t quote this movie to shreds, although you could. I won’t expound upon the fact that Tom Hanks won his second Best Actor Oscar in two years for this movie. I won’t dive deeply into how that part near the end when Forrest asks if Jenny’s son is smart makes me break down faster than an old Honda. I won’t even mention that Forrest shows his ass to President Lyndon B. Johnson  OH WAIT I JUST DID but anyway – I won’t elaborate on all of those amazing things. Because this movie doesn’t need elaboration. It covers the spectrum. From heartfelt to hilarious. From sincere to silly. This movie has something for everyone.

The coolest part for me about this movie is that during all of the initial screen tests, Tom Hanks wasn’t that good. I’m not kidding. You can go find them on the internets but I wouldn’t recommend it. As Tom Hanks was preparing for this movie and doing screen tests with Robin Wright (Jenny/Claire Underwood) he had to break out his first impression of Forrest Gump and it was god awful. If I was the director and watching these screen tests, I would have chosen someone else. Which is why Robert Zemeckis (of Back to the Future fame, another nominee for near movie perfection) is a stone cold genius for choosing Hanks anyway. Watch this interview about how Hanks found Gump’s voice. Hanks instinctual compromise created one of most beloved characters ever. That’s talent, people.

Not including movies like Castaway, Philadelphia (which he won Best Actor for), BIG with the piano(!), A League of Their Own (crying and also baseball), the underrated Charlie Wilson’s War, Polar Express where he voiced practically every character, and The Green Mile for gosh sakes, plus many more….it burns within me not to have these films on this list. But they’re not so good riddance to them! Translation: I’m genuinely sad about it!

Have something else you’d like me to rank? Write it in the comments. And until next time, this has been Ryanked. The Y is silent. Later days.