I don’t go on many dates. In fact, before I begrudgingly signed up for an online dating service, I never went on dates. I had girlfriends in High School and College but I don’t ever remember them and me making future plans that felt like dates. That might be why they are all ex-girlfriends…hmm.

Dates to me, are highly romanticized and happen way more often in movies that I watch than in my own life. When I think of a real date I see a nice restaurant (nice enough that I wear loafers but not so nice that I’m wearing a tie) a small table with a white tablecloth and two chairs across from each other, and one of those fake candles that do the flickers and everything to make them look super real. Follow that with some overpriced steak and wine and/or nachos and beer and there is a date. Also having another human being that agreed they are on a date present is crucial.

More often than not I have gone on stay at home, cook something, and watch a movie dates – which I actually don’t consider dates. I consider them chill hang out times that involve my favorite things listed above plus a lady friend.

When it’s my turn to make a meal on those types of occasions, my options are very limited. I grew up with a mother who was a fantastic cook and had hot meals at the table almost every weekday night, so I never actually had to learn to make anything for myself. When I got to college I had two years of dining halls in which I would sneak out boxes of cereal and fruit and never make my own meals. The closest I got to making my own meals the first two years of college was when my roommates and I would order wings and then I poured honey mustard on top of them and called myself a master chef.

When my junior year rolled around I moved into an on campus apartment which doubled the cost of living if you didn’t get rid of your meal plan. I thought this was absolutely no problem and went head first into the year thinking I would be fine.

I was insanely wrong.

Mine looks nothing like this…I think what I’m feeling right now is shame but I can’t be sure.

After two months of eating nothing but ramen, bagged rice, and hot pockets while begging underclassmen to swipe me into dining halls, I figured that I should probably learn how to cook something rather than eat like a lucky homeless guy. A meal my mother made that I always enjoyed was kielbasa and rice. This meal was an easy starter for me because half of it was something I was already a skilled producer of: bagged rice. I went out to the local grocery store that was conveniently right next to the liquor store and bought the cheapest kielbasa I could find. I felt like I was already half way to the finish line.

The first lesson I had to learn the hard way was that before you put anything on a frying pan you have to cover it in a substance that limits food sticking to it. Needless to say, most of the first batch of kielbasa I tried to make got stuck on the pan and never got into my mouth. After that I decided to go big or go home and cover the entire pan with enough “I Can’t Believe it’s Not Butter” to make Fabio blush. 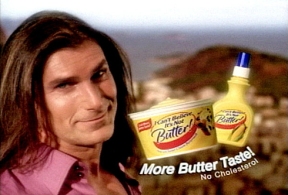 Fabio is a smug SoB

The second lesson I learned is that when you put enough “I Can’t Believe it’s Not Butter” to make Fabio blush on a frying pan, the butter liquefies and then explodes, scolding your entire body. 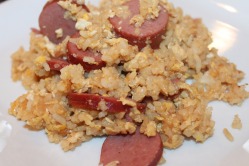 Mine looks way more like this. I know it looks tragic but it’s actually delicious.

I took about a week off after that, but as some old western guy says, when you fall off your horse you have to get back up on the saddle except when the horse gives you second degree burns in which case maybe just keep the horse in the stable for a while and watch Seinfeld reruns for a solid week. Then get back up on the horse.

The next time I tried to make the meal it went much better. I put a normal amount of ICBiNB on the pan, only turned the heat knob up to 7 instead of however high it could possibly go, and cut the kielbasa up just small enough to cook quickly but not so small that they burned to a crisp in seconds. I also wore protective gear just in case of what I was then calling “Butter-Lash” that included ski goggles, full arm silicone lined cooking mitts that cost more than making the meal multiple times, and a specific hoodie that I wouldn’t mind stomping into the ground if it lit on fire. Add some maple syrup to both the kielbasa and the white rice for flavoring and it makes for a great and simple meal that is easy to make the third time while looking like you are cooking meth in your dirty basement.

So, every time someone says to me “why don’t we stay in tonight? We can watch a movie and I’ll cook…” I always cut them off with, “How about I cook?” Then I get an endearing smile and I make them a fantastic meal. Thankfully no one has asked me to do this twice because I would be royally screwed in that situation. Also, if I ever have to learn to cook something new, I will definitely have to find a new pair of goggles.