They make you look like a dirty hippy while simultaneously hugging your feet with the comfort level of a puppy hug. When it rains I wear them anyways and hope for the best. I bought them for 19 dollars at an outlet mall while I was definitely supposed to be Christmas shopping for other people. I do not regret this; it is merely fact. The left moccasin becomes untied often while the right has never done so. Needless to say, I have a favorite moccasin.

Moccasins are a great way to spot pretentious in your face jerks because their faces scrunch up and their hands shrivel into their pockets when they see them. If they only knew.

They have blisters; I have a warm rainbow lower extremity embrace. I submit that my decision and not theirs is the correct one.

If you are a close friend of mine you already know all of this because I bring it up in conversation as much as possible to be annoying and also it makes me proud of myself which doesn’t happen often. Or ever.

After I found out you can self publish on Amazon.com I immediately started working on publishing my first book of Essays: Too Long Did Not Read: A Book of Essays for your Face to Ingest (TLDNR). 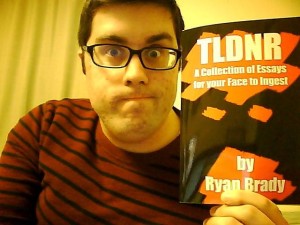 I knew a very small amount of people would buy it but in all reality I didn’t write it because I was looking for a get rich quick scheme. I wrote it because I love writing and I wanted to create a packaged product that I could be proud of and show to the important people in my life.

When I got that book in my hands it was all over. I wanted more immediately. Luckily, the first book I published was actually not the first one I started writing. TLDNR was a distraction book. I had hit writers block on a Fiction project I am still working on and TLDNR jostled my brain just enough in another direction that it got me out of my funk.

As of right now I am 5 or 6 chapters from being done with my Fiction project and have started my second Essay collection book. I have a few separate ideas for what the Essay project will be called and when it’s about half way done I’ll announce it here.

The fiction project is at a point where I am looking for publishers just for kicks. If no one picks it up (very likely) I will sell it for cheap on Amazon myself in Kindle and Paperback. Here is the book summary:

“Loner High School Senior Grant Nichols finds himself in the middle of an Odessa, Texas street with a knife in his hand, a pile of unidentifiable corpses behind him, and enough policemen with cowboy hats pointing their guns at him to cause at least a little bit of concern.

As Grant chooses to run, he brings the reader up to date through flash backs as to why he might not be as bad as the people with guns think he is, how his dream girl might not be so dreamy, and why he is not even close to the biggest problem the town of Odessa will be facing in the foreseeable future. “

As I gain progress on both of these projects I’ll let everyone know what’s up here.

I always go back and forth on whether or not I should actually have a blog or a vlog. That tough decision is not because I don’t think I would have material or writing ability – It’s mostly because I am as unreliable on the internet as I am in real life.

When I say I’m going to do something, I am going to do it. My word is final unless some incredible extenuating circumstance get’s in the way and makes it impossible. When I say I am unreliable I don’t mean that I go back on promises or that I cancel plans just because I don’t want to do something. No, my problem comes before the plans are made and before the promises are doled out.

Before I go on let’s get this out of the way now: I can be a pretentious overbearing offensive crude and unrelenting ass hole. I know this because people have informed me of said behavior. I won’t now get in to why I believe I am this way; so as of now just take my word on it. These characteristics are in no way unique. Talk to most cynical artists and you will find these qualities right on the surface. Ask any writer who actually calls themselves a writer if they have ever fought with some form depression or intense anxiety. I guarantee you most of them will say they have. That’s just how it is. Art can be such a positive and bright force, but only because it has to first rise from a very dark place.

For just that reason, I have no problem with who I am. My friends very much understand what they are signing up for when they step into my life and I step into theirs. I will sometimes hurt them with the truth and I will sometimes offend them with opinions, but never will I mislead them or be false in any ways. I will almost always choose distancing myself before having to be false. I’m as good at burning bridges as I am building them. If you are my friend for long enough I will disappoint you but at the same time I can be the most loyal and loving person in your life. The pros come right along with the cons.

I’m not going to say I will update this on a regular basis because every time I do that I am lying to myself which seems counterproductive. What I will say is that when I have any major updates I will let you internet peeps know.

Also, on a side note, BUY MY BOOK AND STUFF. (link in the sidebar)